When Does a Baby’s Eye Color Change? 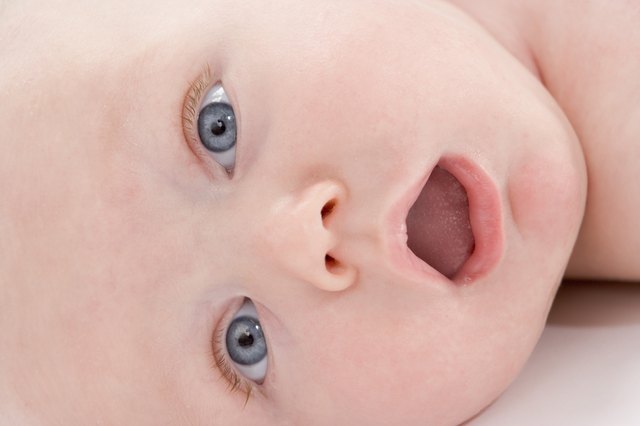 Many babies–especially Caucasian infants–have blue eyes when they enter the world, even though most of them will not have blue eyes when they grow up. Through a quirk of gene regulation and pigment production, a baby’s eyes may change or darken as he passes through infancy, explains by Dr. Aaron Shafer of the Stanford School of Medicine’s Tech Museum.

An infant’s eyes may change color or darken during the first 3 to 6 months of his life, explains KidsHealth from Nemours. Occasionally, the process takes even longer. Your baby’s eye color becomes firmly established by 6 to 12 months, Sutter Health reports. Once your baby reaches his first birthday, his eyes will most likely remain the same general color for the rest of his life.

Eyes that will become dark colors–such as brown–usually change within the first couple of months, notes the Children’s Physician Network. On the other hand, eyes that will remain or become light colors–such as blue–often take the full six months to reach their ultimate shade.

Before birth, the cells in your baby’s eyes may ignore the genes that determine eye color, explains Stanford’s Dr. Shafer. As a result, the eyes don’t start producing pigment while the baby remains in the womb. When an eye has very little pigment, it appears to be blue; hence, when the baby is born, he has blue eyes. After birth, light stimulates the production of pigment–based on the baby’s genes–but it takes a long time for the eye to store up the indicated amount and type of color.

Even after the normal one-year mark, a child’s eyes may change color. Certain diseases can reduce pigment, the Tech Museum notes, and some viruses can increase it. Occasionally, the hormones of puberty can affect the genes that regulate eye color. In some cases, normal genetics can cause the eyes to darken slightly throughout childhood, adolescence and even adulthood, according to results from a study led by Laszlo Z. Bito and published in the May 1997 edition of “Archives of Ophthalmology.”

If your newborn has brown eyes, the color won’t change, explains KidsHealth; the eyes already contain the amount of pigment prescribed by the baby’s genetic code. Blue or gray eyes, on the other hand, simply have small amounts of pigment, and as your baby’s eyes continue producing pigment, his eyes may darken throughout the first six months of his life.

Because most Asian and African-American newborns have brown eyes, their eyes will most likely remain the same throughout infancy and childhood. Caucasian babies most often have blue eyes, which may or may not change color.

12 Ovulation Symptoms To Help You Get Pregnant